This holiday, family and friends would definitely appreciate a gift by Longines. Refined and efficient timepieces that can satisfy even the most demanding people. Longines watches cannot be unnoticed.

Longines has been based at Saint-Imier in Switzerland since 1982. Its watchmaking expertise reflects a strong devotion to tradition, elegance and performance, values that totally conform to my perspective. With many years of experience as a timekeeper for world championships in sport or as partner of international sports federations, Longines – famous for the elegance of its timepieces – is a member of Swatch Group Ltd, the world’s leading manufacturer of horological products.

Longines features five collections. Each collection has its very own style while remaining true to timeless elegance, that is the core value of the brand. The watchmaking company created five different atmospheres, which will surely enchant and fine Swiss watchmaking.

Let the delicacy of these Swiss watches enthrall you with their harmonious lines, inspired by timeless class. The ageless refinement of these creations can only compare to the technical percision of their manufacturing. These timepieces will accompany you elegantly to even the most sophisticated occasions.

Whether they are esthetic or technical, Longines’ watchmaking innovations have. over the years, established the winged hourglass of the brand as an actual symbol of Swiss watchmaking expertise and elegance. The mechanical watches of this collection are the result of the brand’s longstanding tradition. The charm and character of the exceptional automatic watches will appeal to even the most demanding people.

Longines is closely linked with the equestrian sports since 1878, when it produced a chronograph engraved with a jockey and his mount. True to the mixture of tradition and innovation specific to Longines, the models are inspired both by old pieces and by resolutely modern elements typical of the equestrian world.

Longines’ sports watches are the embodiment of the very special bond that the brand has built with the world of sports throughout its history. These creations combine innovation with sophistication, and illustrate the quest for performance that is essential to the Swiss watchmaker. The elegance and their exceptional features will accompany you every day.

Longines has created this remarkable collection as an homage to the original elegance and ethetic of its historic timepieces. This collection combines the refinement of the past to the high precision of modern Swiss watchmaking techniques. You will surely appreciate the charm of these unique automatic watches that perfectly embody the essence of the winged hourglass brand.

The brand known by its winged hourglass now has outlets in over 150 countries. In 1832 Auguste Agassiz entered the world of horology when he joined a trading office established in St. Imier. He soon rose to become the manager and the company took on the name Agassiz & Co. At the time, he was producing timepieces under the “établissage” system, whereby watchmakers worked at home and supplied their products to the trading offices. Agassiz built up a network of commercial contacts, which enabled him to sell his watches on other continents, in particular in North America. During the 1850s Agassiz’s nephew Ernest Francillon took over the running of the office. When Francillon took on this responsibility, he considered ways of perfecting the manufacturing methods used in watchmaking in the area. He concluded that it would be advantageous to try to bring together the different stages that go towards making a watch under one roof.

Francillon’s intention was to set up a factory where he could assemble and finish each watch, introducing a degree of mechanisation. In order to achieve this, he bought two adjoining pieces of land in 1866 on the right bank of the River Suze, which runs through the St. Imier valley. The site was known locally as Les Longines and he adopted this name for the factory which he built there in 1867. Ernest Francillon took on Jacques David, a young engineer who was also related to him, to help develop the machines needed for perfecting the manufacture of timepieces. During the 1870s, Francillon’s choice of industrial options was proved sound and the factory continually expanded until the first third of the 20th century: in 1911 the Longines factory employed over 1,100 workers and sold its products all over the world.

The technical research carried out at Longines was rewarded by various prizes which gradually gave the company its reputation of winning the most awards in international and world exhibitions until the 1929 exhibition in Barcelona, by which time Longines had won no fewer than 10 Grand Prix. In 1889, Francillon patented a trademark comprising the name Longines and the now famous winged hourglass. Today, Longines is the oldest trademark or logo still in use in its original form registered with the World Intellectual Property Organization (WIPO). As early as 1867, Longines was using the winged hourglass symbol and the tradename “Longines” as a guarantee of quality in order to combat counterfeit products aimed at taking advantage of the reputation already established by the company. 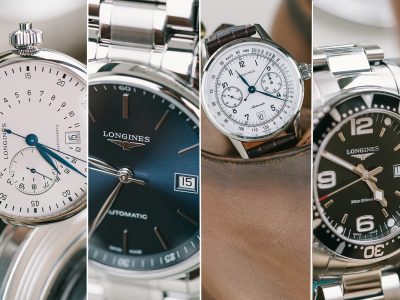 A Man’s Guide to Watches

On time for Christmas with Longines